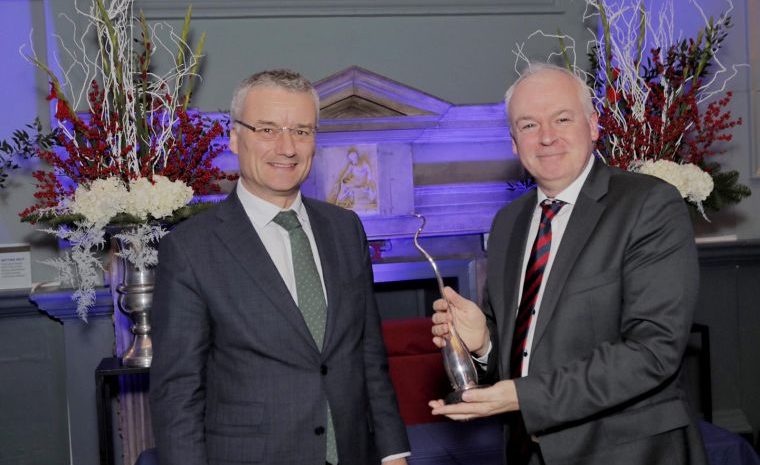 Leading researchers and inventors at Trinity College Dublin were acknowledged for their innovative research and entrepreneurship at the Trinity Innovation Awards 2018 special awards ceremony. The highest accolade, the Provost Innovation Award went to Trinity’s Professor of Computer Science Vinny Wade and Director of the ADAPT Centre for his outstanding contribution to innovation throughout his career.

Professor Wade is a recognised world leading expert on adaptive intelligent systems and personalisation. As the Co-Founder and Director of the SFI funded ADAPT Centre he has led the establishment of a world leading multi-institutional research centre, working with over 50 industry partners on next generation intelligent digital technologies. The Centre engages with a broad range of companies in Ireland and beyond, ranging from indigenous start-ups to multinational enterprises. His consistent contribution to innovation has resulted in highly successful industry collaborations, licences and the formation of new commercial ventures.

Congratulating him on the award, Provost, Dr Patrick Prendergast said: “I am delighted to be presenting this award tonight to Professor Vinny Wade. Through his innovative research he is continuously exploring new ways to unlock the potential of digital content, empowering and enhancing online engagement between people. Trinity academics have consistently achieved excellence in discovery and innovation, and Vinny is one of our role models in converting breakthrough concepts into practical solutions.”

Professor Vinny Wade is a recognised expert in the research of adaptive intelligent systems and personalisation.  In addition to his role at the ADAPT Centre, Professor Wade was also co-founder and director of the Centre for Next Generation Language Technologies, as well as founder and academic director of the Learnovate Centre, an industry-academic led centre focussing on technology enhanced learning. Professor Wade was a visiting scientist at IBM (Centre for Advanced Studies) from 2006-2009. In 2012, he was designated by Enterprise Ireland as an ‘EU Champion’ for his level of success in EU Framework research. He has authored over 300 scientific papers in peer-reviewed research journals and international conferences and has won over €55 Million in research grants in the areas of intelligent systems, adaptive systems and personalisation.

Professor Wade was joined by seven other Innovation Award winners at the special ceremony including: