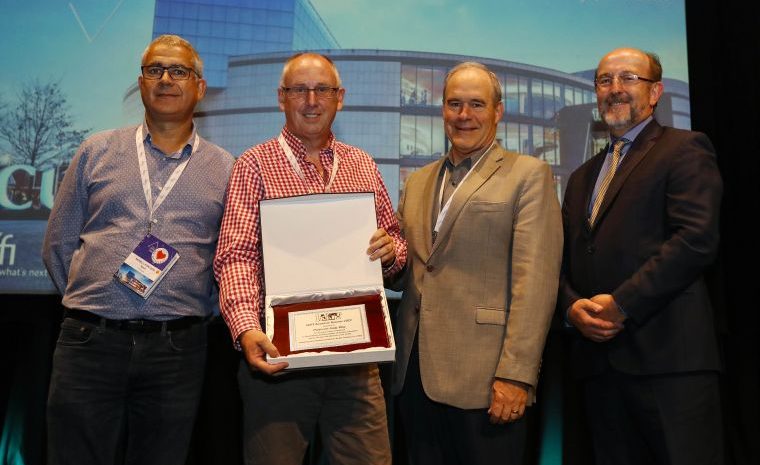 Professor Andy Way, Deputy Director of the ADAPT Centre and Professor of Computing at DCU, has been selected as the winner of the Award of Honour from the prestigious International Association for Machine Translation (IAMT).

The award was presented to Professor Way at a ceremony at the world’s largest machine translation conference, the MT Summit, which took place last week in DCU.  Delivering the commendation, President of the IAMT, Professor Mikel Forcada said:

“Professor Andy Way is one of the leaders in machine translation research worldwide. He has published an abundance of peer-reviewed conference and journal papers about many different aspects of machine translation, which are widely cited. During the last 25 years, he has built and leads here, at Dublin City University, one of the strongest machine translation groups in the world, a group which is now part of the ADAPT Centre where he is deputy director, and which has attracted top researchers and a large number of Irish and European projects, some of which he has led personally. During these years, 24 of his students have successfully defended their PhD theses, many of which work for prestigious academic institutions or leading companies in the field.”

Professor Way has led the development of the hybrid approach to machine translation, which has become the dominant approach in the field.    He is held in high esteem by his peers and has been the editor of the leading journal in the field, Machine Translation, and served as President of the European Association for Machine Translation.  He has published over 300 seminal and ground-breaking articles, and he is listed among the top researchers in the field in terms Google Scholar citations.  Andy Way has also chaired top conferences of the field and is responsible for this year’s MT Summit which has welcomed the largest number of attendees ever for this conference.

The IAMT Award of Honour is conferred every two years to an individual member who has made an outstanding contribution to the promotion and development of machine translation.  Past recipients of these award include: Makoto Nagao, Muriel Vasconcellos, John Hutchins, Maghi King, Winfred Lehmann, Bente Maegaard, Hitoshi Iida, Hermann Ney, Philipp Koehn and Jun-Ichi Tsujii.  The selection committee, comprised by Hiromi Nakaiwa and Eiichiro Sumita on behalf of AAMT, Steve Richardson on behalf of AMTA, and Lucia Specia and Professor Mikel Forcada on behalf of EAMT.