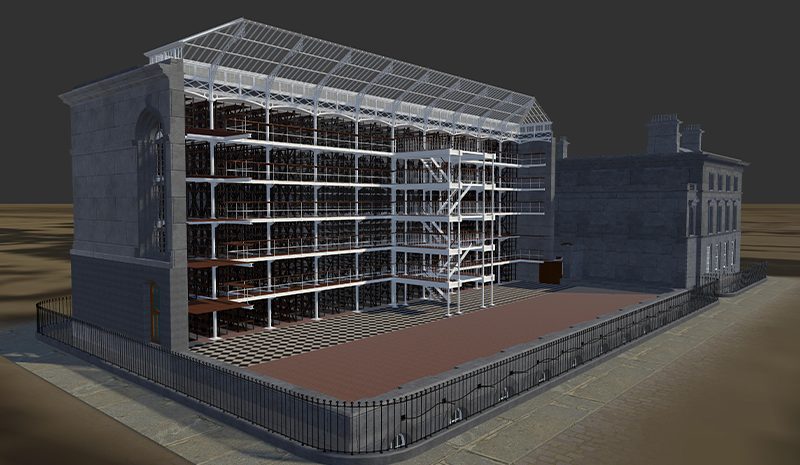 For the first time in 100 years, the public will be able to ‘step back in time’ to explore a virtual recreation of the Public Record Office of Ireland and its collections, as they were on the eve of their destruction at Dublin’s Four Courts at the outset of the Civil War.

When the Public Record Office of Ireland was destroyed by fire in 1922, hundreds of thousands of precious historical documents relating to all aspects of Irish life were lost — apparently forever. The Virtual Record Treasury of Ireland is a vast and growing treasury of replacement documents newly discovered in partner archives around the world.  Freely and permanently available online, everyone with an interest in Ireland’s past will be able to explore seven centuries of Irish history through tens of thousands of searchable documents. (https://virtualtreasury.ie/)

The Virtual Record Treasury of Ireland is the outcome of a five-year State-funded programme of research entitled ‘Beyond 2022’. Led by Trinity College Dublin, Beyond 2022 has combined historical investigation, archival conservation, and technical innovation to re-imagine and recreate, through digital technologies, the archive that was lost on 30th June 1922.

The ground-breaking research programme has been developed by historians in Trinity College and computer scientists in the SFI ADAPT Centre, in partnership with five core partners: National Archives of Ireland, National Archives (UK), Public Record Office of Northern Ireland, Irish Manuscripts Commission and the Library of Trinity College Dublin.  The Virtual Record Treasury is a meaningful legacy for the State’s Decade of Centenaries programme (2012-2023).  It is funded by the Government of Ireland under Project Ireland 2040 through the Department of Tourism, Culture, Arts, Gaeltacht, Sport and Media.

The Virtual Record Treasury at a glance:

Speaking ahead of the launch, Taoiseach Micheál Martin, said: “The Virtual Record Treasury is an enduring and meaningful legacy for our Decade of Centenaries.  It belongs to the people of Ireland, democratising access to our rich archival heritage and making our shared history accessible for everyone.  It is an invaluable historical resource for people of all traditions across the island and for everyone of Irish heritage around the world.  It is an immense achievement and testament to the commitment and dedication of the Beyond 2022 project team.”

The Tánaiste, Leo Varadkar, said: “This is a really exciting project which opens new doors into Irish history. It brings together a wealth of information from around the world to illustrate what happened in Ireland, and helps to fill in the blanks arising from that infamous 1922 fire in the Public Record Office. I congratulate the team on bringing this amazing project to life.”

Minister Catherine Martin reflected: “The pioneering technology behind the Beyond 2022 project is so exciting and testament to Ireland’s leadership and talent in ground-breaking research and innovation. The Decade of Centenaries has gifted us with a wealth of resources at our fingertips, such as the Virtual Record Treasury, to help us to step back in time and engage with our history, grounded in the factual evidence for the events that occurred. What was previously unexplored, unintelligible, or inaccessible to us is now revealed, allowing for new insights and perspectives. It is an inspiring and enduring legacy for our Decade of Centenaries, which my Department is delighted to support under Project Ireland 2040.  The partnership and generosity of spirit from the archival partners and the resulting all-island and international collaboration is outstanding and most sincerely and deeply appreciated.”

‘Beyond 2022’ Programme Director Dr Peter Crooks, Associate Professor in Medieval History, Trinity, said: “The Record Treasury at the Public Record Office of Ireland was one of the great archives of Europe.  The devastating cultural loss of the archive in 1922 has hampered our understanding of Ireland’s past. Thanks to the meticulous record-keeping of generations of archivists, historians, copyists, genealogists and clerks, thousands of duplicates and transcripts of Ireland’s records, scattered across the world, have been preserved. Record by record, shelf by shelf, historians, archivists and computer scientists are bringing Ireland’s destroyed national treasure back to life.”

Trinity’s Provost, Dr Linda Doyle, added: “What seemed impossible has been made a reality by the fusion of historical research with technological innovation.  I want to congratulate the team at the ADAPT Centre in Trinity who worked so creatively with historians and archivists to make this virtual treasury accessible to the public. Technology should be at the service of society and, having watched this project evolve over the past four years, it gives me great pride to see that demonstrated today.”

Director of the SFI ADAPT Centre, Professor Vinny Wade, said: “This project shows how AI offers more than a vision of the future; it provides a way of connecting to our past and to each other.  By using cutting-edge AI technology we have been able to recreate a critical part of our country’s history, a heritage which was believed for a century to have been lost forever.  These new technologies has opened up a new technological frontier, creating new research possibilities and education opportunities with limitless potential.  AI can enrich heritage collections and through this project we have demonstrated how it can help democratise knowledge, making it easier to explore, helping people find what they’re looking for, enabling institutes to link with other collections, and opening up endless possibilities.”

Gain access to a depth of knowledge from established researchers & utilise Human+'s specialised human-centric approach to elevate your career.