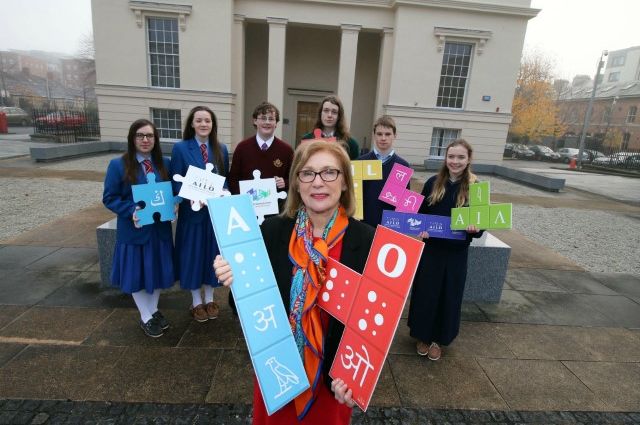 The search is on for Ireland’s best young problem solvers! Minister for Education and Skills, Jan O’Sullivan, launched the 2015/6 season of the All Ireland Linguistics Olympiad (AILO), an innovative competition in which secondary school students develop their own strategies for solving problems in fascinating languages from around the globe.  The prize for the top four decoders is the opportunity to represent Ireland at the International Linguistics Olympiad in Mysore, India in July 2016.

In 2014 the AILO evaluation report highlighted that 82% of students reported better problem-solving skills as well as increased propensity to take up courses in STEM topics.  Already 3,000 students have signed up for AILO 2015/6 and it is hoped that the 2014/5 number of 4000 participants will be exceeded before the application deadline of 25th January 2016.

Speaking about AILO, Minister O’Sullivan said: “AILO continues to go from strength-to-strength.  It’s a great competition that challenges second-level students in a fun and engaging way.  The analytical skills students develop are not only vital for careers at the cross-section of computing and linguistics, but are transferable skills that are critical for a range of STEM careers. I encourage students to take part in AILO 2015/6 and test their minds against the world’s languages.”

Established in 2009, AILO’s primary aim is to enhance students’ problem solving skills in order to prepare them for high-tech careers in Ireland’s multi-billion euro digital content sector. The competition challenges secondary school students to engage in code-breaking to decipher complex puzzles in unfamiliar languages. Students use their ingenuity to solve puzzles such as deciphering Egyptian hieroglyphics, decoding numerical spy codes, and interpreting Mayan poetry. The contest is run by the ADAPT Centre for Digital Content Technology, a Science Foundation Ireland funded research centre led out of Trinity College Dublin, and aims to develop students’ problem-solving skills, inspiring them to consider the fascinating range of careers at the intersection of computing, linguistics and language.

This year a new pre-Round One training programme has been launched with ADAPT hosting a number of regional AILO problem-solving workshops in hubs all over the island between 11-22 January 2016. Round one will take place in secondary schools on 1st February 2016.

Director of ADAPT and Professor in Computer Science at Trinity College Dublin, Vincent Wade, added: “The AILO competition is helping Ireland push the boundaries of modern science by challenging the next generation of scientists, innovators and problem-solvers.  This initiative helps students develop the skills necessary to ensure Ireland is a world leader in STEM education and related industries. With over 13,000 participants to date, we at ADAPT are committed to developing problem-solving techniques in secondary school students in Ireland through the AILO competition.”

The top 100 students from the qualifying round will progress to the national final, which will be held at Trinity College Dublin on 15th March 2016. The overall top four performers will go on to represent Ireland at the International Linguistics Olympiad in India in July 2016.