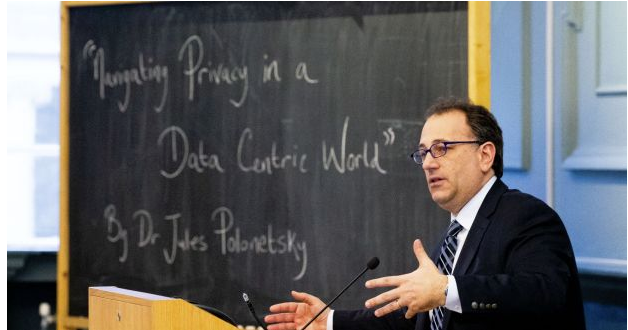 During this talk, Dr Polonetsky addressed how the rapid evolution of digital technologies has thrown up social and ethical dilemmas that we have hardly begun to understand. New technologies such as AI, connected cars, wearables and social media are contributing to privacy tensions.  He addressed how the EU’s General Data Protection Regulation might shape the development of data-intensive technologies and also spoke about proposed new privacy legislation in the US.

Speaking about genetics and DNA testing, Dr Polonetsky highlighted that technologies could identify the occurrence of disease in a particular area but also noted how that same data could be used against entire classes of people.  This was the challenge to ethics.  For sites that offer direct-to-consumer genetic testing he commented that “we have started to see law enforcement eager to access some of these databases to capture killers and rapists, both showing what can be achieved but also showing the fact that the purchase of data, including data in one of these open databases, mean that your relatives and anybody connected to you is part of a database accessible to the police”.  Dr Polentsky’s work with the Future of Privacy Forum saw the first blueprint of privacy guidelines being developed to regulate the sharing of DNA data to businesses or police in the US and he commented that it was the “first effort at showing the sector what the right way to handle some of these challenges is”.

The event was organised by the Ethics & Privacy Working Group of the ADAPT Centre and is run in association with Trinity College Dublin’s Schools of Law; Religions, Peace Studies and Theology; DCU Institute of Ethics, and the Trinity College Library.

Dr Jules Polonetsky is CEO of the Future of Privacy Forum which is supported by the chief privacy officers of more than 130 leading companies, several foundations, as well as by an advisory board comprised of the leading academics and advocates in the USA. FPF’s current projects focus on Big Data, Mobile, Location, Apps, the Internet of Things, Wearables, De-Identification, Connected Cars and Student Privacy. Jules previous roles have included serving as Chief Privacy Officer at AOL and before that at DoubleClick, as Consumer Affairs Commissioner for New York City, as an elected New York State Legislator and as a congressional staffer, and as an attorney.