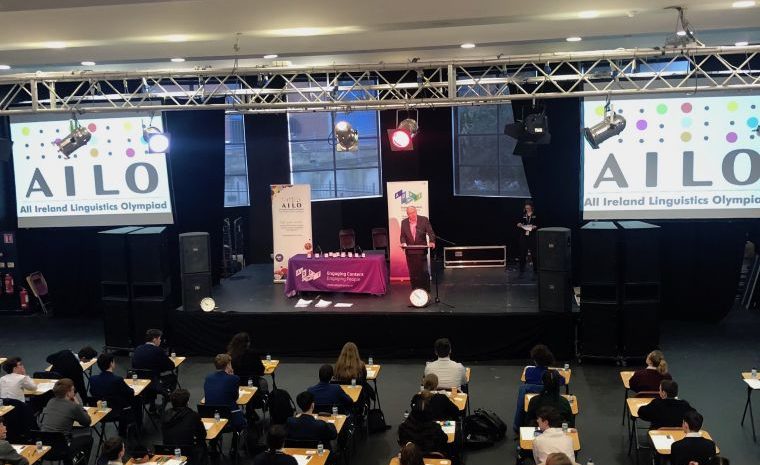 Talented problem-solvers from all over Ireland are tackling the world’s toughest puzzles in logic, language and linguistics at the National Final of the ADAPT All Ireland Linguistics Olympiad held in Dublin City University today. From a starting lineup of 4,000 students, 100 of Ireland’s top young problem-solvers will compete. Run by ADAPT, an SFI research centre, the contest challenges secondary school students to apply logic and reasoning skills to solve complex puzzles in unfamiliar languages.

Competing in individual and team competition today, the students are facing languages from five continents with languages ranging from 240 speakers to millions. Individual questions cover writing systems, word-building and number-systems. The team question involves a variety of English that very few people will ordinarily be familiar with and is guaranteed to be fun as well as challenging.

The Preliminary Round of AILO was held in students’ own schools in every county in early February. Students from fifty-four schools from twenty counties on the island of Ireland qualified for the National Final.  Four winners of the national final will have the opportunity to represent Ireland at the International Linguistics Olympiad in Yongin, South Korea from 29 July to the 2 August this year.

The All Ireland Linguistics Olympiad (AILO) challenges students to use their lateral thinking skills to solve puzzles in languages from all over the globe. Students must analyse the data they are given to work out the ‘rules’ of this new language. Students had the opportunity to attend free workshops which provided strategies for analysing data, examples of language and number systems and how to write clear rules to explain answers. These transferable skills are very important in other subjects such as Maths, Coding and learning new languages.

AILO helps students to develop a powerful blend of problem-solving expertise and language competency, which are vital skills in today’s global economy. In 2018, the learning outcomes for students taking part in AILO were aligned to the Junior Certificates (JC) Key Skills / Statements of Learning (SoL) and the OECD PISA (2012/2015) collaborative and creative problem-solving competencies, highlighting how the competition supports the curriculum in Ireland. The contest also aims to inspire students to pursue the exciting range of careers combining computing, linguistics and languages.

The results of the National Final of the All Ireland Linguistics Olympiad will be released within the next fortnight. Sample puzzles from the Olympiad can be downloaded at https://ailo.adaptcentre.ie/sample-puzzles/