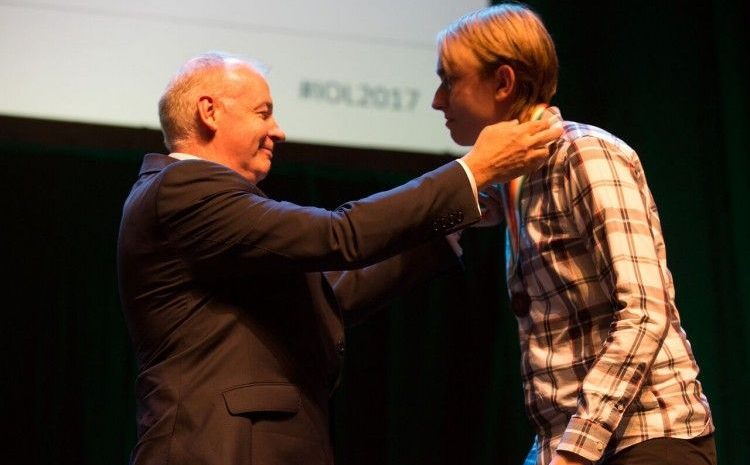 Last week, the efforts made by international students in the 15th International Linguistics Olympiad were celebrated at the competition’s Closing Ceremony at Dublin City University. Throughout this week-long contest, world-leading students worked both individually and in teams to decipher linguistic codes and put their problem-solving skills to the test. The event was hosted by the ADAPT Centre, and ran from the 31 July to the 4 August. During this week 43 teams consisting of 172 students who previously achieved gold medals in their respective national competitions competed for the global prize.

Winners of the individual and team contests were announced last Friday at the week’s Closing Ceremony, held in the Helix at DCU. Taiwan’s team TaiTWO were awarded the gold medal for the team competition, with Poland’s Team Ą achieving the silver medal, and Team Slovenia receiving bronze. The remainder of IOL 2017’s results can be found on the official IOL 2017 website.

The IOL challenges students to apply logic, computational thinking and problem-solving skills to solve some of the world’s most complex problems in linguistics and language. This year’s contestants were challenged with such tasks as decoding emoji scripts presented to them in Indonesian. The IOL was a key element of ADAPT and SFI’s Problem Solving Initiative, which will culminate in a problem-solving festival open to all members of the public. This festival will be held in Trinity College Dublin on 30 September, and will involve mind-bending puzzles suitable for all ages.

Find out what you missed by viewing the highlights reel from IOL 2017, and RTE News coverage of the Opening Ceremony.

Registration for the next season of the All-Ireland Linguistics Olympiad will open in September 2017, and can be found on the AILO website. Successful contestants in next year’s AILO will get the chance to compete in the next IOL, which will be held during the summer months in Prague, Czech Republic in 2018.

This looks like it's going to be an excellent series. Important that our public service broadcaster tackles this subject head on and in the very skilled hands of @dellakilroy & @shanecreevy. https://twitter.com/RTEOne/status/1394253867097878531