Congratulations to the Four X Four – AILO 2020 draws winners from each of the Four Provinces! 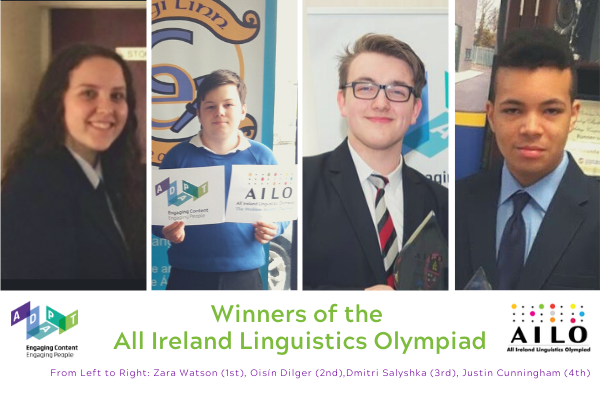 From a starting lineup of 4,000 students, four students from the four provinces of Ireland came out top in the National Final of the All Ireland Linguistics Olympiad last week.

25 March 2020, Ireland: Talented problem-solvers from all over Ireland tackled the world’s toughest puzzles in logic, language and linguistics in the National Final of the 12th ADAPT All Ireland Linguistics Olympiad last week. The final (normally held in DCU Dublin), was one of early educational events to be held remotely in schools just prior to schools closing. Run by ADAPT, an SFI research centre, the contest challenges secondary school students to apply logic and reasoning skills to solve complex puzzles in unfamiliar languages.

Cathal ÓhÓbáin (15) from Sutton Park School in Dublin is the AILO 2020 National Junior Champion. As well as being the best junior competitor (under 16), Cathal also came 9th overall in the Olympiad.

Competing in the individual competition in their own schools, the students faced languages from four continents with languages ranging from 30 million speakers in West Africa to four individuals at the three-state border of Peru, Bolivia and Brazil.

Students from fifty-eight schools from twenty counties on the island of Ireland took part in the National Final.

The four winners of the national final will have the opportunity to represent Ireland at the International Linguistics Olympiad. Arrangements for the final in Venspils, Latvia from 20-24 July are on hold due to new Coronavirus restrictions.

The All Ireland Linguistics Olympiad (AILO) challenges students to use their lateral thinking skills to solve puzzles in languages from all over the globe. Students must analyse the data they are given to work out the ‘rules’ of this new language. Students had the opportunity to attend thirty free nation-wide ADAPT AILO workshops which provided strategies for analysing data, examples of language and number systems and how to write clear rules to explain answers. These transferable skills are very important in other subjects such as Maths, Coding and learning new languages.

Sample puzzles from the Olympiad can be downloaded HERE.