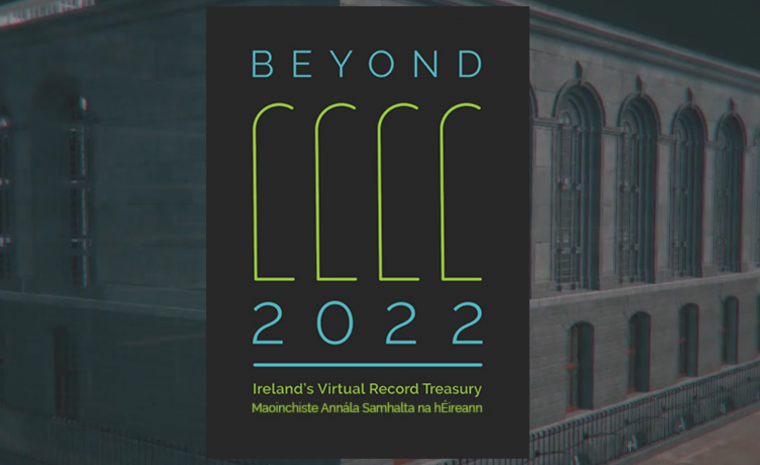 An Taoiseach Leo Varadkar TD announced €2.5 million in Government funding today for a flagship research project led by Trinity College Dublin which will digitally recreate seven centuries of historical records of the Public Record Office of Ireland destroyed by fire at Dublin’s Four Courts at the beginning of the Irish Civil War.

The destruction of the Public Record Office of Ireland, at the Four Courts, on 30th June 1922 was a devastating cultural loss.  While not comparable with the loss of human life, it was one of the great tragedies of the Civil War.

The Beyond 2022: Ireland’s Virtual Record Treasury research project is an exciting all-island and international collaborative project.  It seeks to re-imagine and re-create, through virtual reality, this national treasure and the archival collections that were lost, comprising records of seven centuries of Irish history, genealogy and administration.

This is the first time that the project’s 5 core archival partners – the National Archives of Ireland, The National Archives UK, the Public Record Office of Northern Ireland, the Irish Manuscripts Commission and the Library of Trinity College Dublin – have formally collaborated on a shared enterprise, although they have longstanding historical connections.

The project is supported by the Irish Government, through a capital grant funding allocation of €2.5 million from the Department of Culture, Heritage and the Gaeltacht, under Project Ireland 2040.

The first phase of the research project funded by the Irish Research Council was led by historian, Dr Peter Crooks, and computer scientist, the late Dr Séamus Lawless of ADAPT, the SFI-funded Research Centre.  It identified over 200 volumes of transcripts suitable for enhanced digitisation, now scattered between archives in the United States, the United Kingdom and archives on the island of Ireland.  These handwritten records contain more than 25 million words from documents destroyed in 1922.

With this exciting new funding announcement, the project will create a Virtual Record Treasury and reunite for the first time in a century, thousands of stories of life, law, land and loss in Ireland’s history.

The primary outcome from Phase II will be a fully immersive, three-dimensional, virtual reality model of the digitally reconstructed Public Record Office of Ireland, which will be launched in June 2022 to mark the centenary of the fire.  This model will be used as an interactive tool for engagement and research, whereby visitors will be able to browse the virtual shelves and link to substitute or salvaged records held by archives and libraries around the world.

“I am honoured to launch Beyond 2022: Ireland’s Virtual Record Treasury research project.  This all-island and international collaborative initiative offers a permanent, meaningful and imaginative legacy beyond the conclusion of the Decade of Centenaries.  It restores a significant missing chapter in our history, which was believed to be irretrievably lost, with the recreation of seven centuries of historical, genealogical and administrative records to enable a new understanding of Ireland’s shared past.

Beyond 2022 will enable the scholars of tomorrow to rewrite the story of the peoples of our islands.

This partnership of major institutions in Ireland and the UK, supported by the Government-funded research centre, ADAPT, will showcase our work in artificial intelligence and virtual reality to a global audience.   We will set an international benchmark in digital recovery from cultural loss.”

“Throughout the Decade of Centenaries, we have shown great maturity and understanding in exploring our past, embracing its complexities and nuances in an inclusive and respectful manner.  Access to authenticated sources is essential to our understanding of the legacy and impact of the overall narrative and associated public debate.  Local stories and perspectives and access to local archives can very powerfully enhance our understanding of the impact and legacy of the overall narrative.

I welcome the generous spirit of partnership and collaboration with which the core archival partners and other participating institutions have embraced the Beyond 2022:  Ireland’s Virtual Record Treasury.  As custodians of our history and culture, you all have such an influential and important role in creating opportunities for people of all ages and traditions to explore and reflect upon our past.

The archival discovery element of the project is particularly exciting and the breadth of the material that will be digitised over the course of this project is truly astounding.  New generations of scholars will have unprecedented opportunities to reconnect with our shared history and heritage.  Indeed, anyone with an interest in history, on the island of Ireland and around the globe, will be able to engage with the past in a completely new and exciting way that is personal and meaningful.”

“Beyond 2022 is an historic landmark international research collaboration combining historical research, archival discovery and technical innovation. Trinity’s leading historians and computer scientists have come together in this ground-breaking interdisciplinary research project at scale which has the potential of rewriting Irish history across the past millennium. It will provide a lasting and meaningful legacy democratising access to invaluable records and archives across Ireland and the World.”

“The Four Courts blaze of 1922 was a national tragedy, but thankfully all is not lost. Beyond 2022 combines virtual reality and big data to recover from the losses of 1922 to a greater extent than ever previously imagined. The scale of copies and duplicates we have identified in other archives is astounding. We are already working with over 35 libraries and archives in Ireland, the UK and USA. And this is only the beginning.”

“Beyond 2022 is using the technology of the future to restore our lost history.  The immersive Artificial Intelligence and Virtual Reality technology used in the project provides an opportunity to blend the physical with the digital and offers all users an opportunity to virtually search an archive that most thought was lost forever in the fire.  We are delighted ADAPT’s state-of-the-art technology is providing this important portal to the past.”

Check out the video and article below to learn more about the visit!