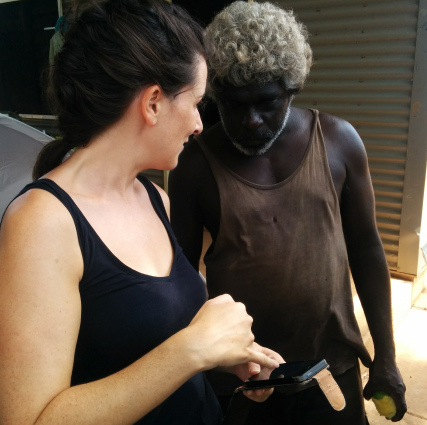 Many indigenous languages around the world are endagered, partly because they are traditionally oral languages.  This means there is very little written material available in these languages and once the last speakers die, the language tends to die with them. Dr Teresa Lynn, a postdoctoral researcher with ADAPT, recently travelled on a linguistic fieldwork trip in Australia aimed at preserving an Australian Aboriginal Language.  Kunwinjku is an Aboriginal language spoken by roughly 1500-2000 people in the Northern Territory state of Australia. Like all indigenous Australian languages, Kunwinjku, is a UNESCO endangered language, and like Irish, it is a minority language in a country where English is the strong dominant language.  Dr Lynn’s work in data collection is part of a larger project that involves developing intelligent systems that can aid in documenting minority languages for future analysis.

Speaking about her experience Dr Lynn said: “My research interests in technology for minority or endangered languages led to me teaming up with Dr Steven Bird, of the University of Melbourne, on an expedition which involved documenting Kunwinjku (pronounced Gun-win-goo), an Australian Aboriginal language. Dr Bird was involved with the design of the mobile technologies used in this project (Lig-Aikuma and Zahwa), which are specifically designed for our task at hand – namely collecting bilingual audio of the Kunwinjku for the purpose of language preservation. This means that we recorded native speakers telling stories or describing activities, producing spontaneous, non-scripted speech, in both Kunwinjku and in English. The purpose of storing and aligning these recordings is to allow intelligent systems of the future to assist with automatic transcription, thus aiding the difficult task that lies ahead of classical linguists who are trying to document these languages.”

In contrast to other minority languages used closely with English, the number of Kunwinjku speakers has remained relatively unchanged in recent years. This is partly due to the remoteness of the tribal area and their ability to live relatively uninfluenced by the western culture of the rest of Australia. The community does have access to smart phones, TV, videos and the Internet however they have no need for speaking English in their daily lives unless dealing with the rare ‘balanda’ (white person) with whom they might interact on occasion. The Aboriginal people do, however, see the importance of having good English language skills. Despite there being some older generations who did not speak English at all, the children have a very strong grasp of English, to which they can effortlessly switch to when speaking if needs be.

Aboriginal languages are believed to date back to over 50,000 years ago. Research shows that before the European colonists arrived in 1788, there were about 250-300 languages. There are now 20 ‘healthy’ languages left – those, which are being passed onto younger generations. It is for this reason that this data collection project is so important. The Aikuma software has already proven successful in language documentation projects in Papua New Guinea, Brazil and Africa.

Dr Lynn concluded: “The people of Manmoyi and Mamardawerre are very welcoming and encouraging of this project. They understand the importance of conserving their heritage through language documentation. Much of their culture revolves around storytelling – as is often the case with traditionally oral languages. Their ‘Dreaming’ stories relate in many ways to superstitions or curses, and are not unlike the Irish folklore stories of banshees and fairy folk.  It is therefore a relatively easy task to engage Kunwinjku people in spontaneous recording activities.  As the technology can be installed easily onto Android phones, the indigenous people can take part in preserving their own language and not rely on outsiders to acquire hard-to-find funding to carry out the data collection.”

The project will result in access to an open access corpora of linguistic diversity that previously has not been possible. The positive impact of this on linguistic and socio-linguistic studies worldwide is unquestionable.