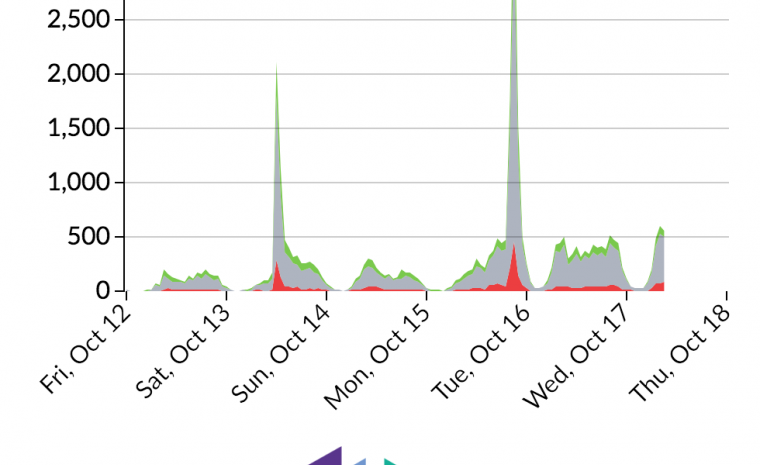 The ADAPT Centre tailored its responsive Twitter harvesting tool, ‘SentiWords Tweets’, to provide automatic real-time generation of the quantity and sentiment associated with the six candidates accounts and the main hashtags, for example #Aras18.  Tweets carry sentiments from their senders and can provide insights when trying to understand the public’s opinions and views on candidates.

The main observations from the twitter conversations on the debate showed that on the evening, over 3,500 tweets related to the presidential campaign.  The majority of this Twittter conversation was related to Liadh Ní Riada, with 1,741 tweets.  The sentiment attached to these tweets showed public opinion to be 19% positive and 11% negative with 70% of the tweets neutral.

Despite not being present, Michael D had the second largest amount of tweets with 891 associated with him.  These were 19% positive, 14% negative and 67% neutral.

Gavin Duffy ranked third in Twitter mentions with 800 tweets. Of these, 183 or 23% were positive, outperforming Michael D Higgins in positive tweets.  The number was still less than half the number of positive tweets Liadh Ní Riada received.  Duffy also had 11% negative tweets and 66% neutral.

Sean Gallagher’s Twitter presence suffered due to his absence with only 517 tweets that included his mention.  Of those 16% were negative, 11% positive and 73% neutral.

Peter Casey and Joan Freeman took a smaller portion of the Twitter conversation with 461 and 419 tweets respectively.

Social media and the changes it has brought to communication technology is playing an increasingly important role in influencing electoral behaviour.  There are two more televised presidential debates scheduled to take place before polling day. All six candidates are expected to take part in a Virgin Media One debate hosted by Pat Kenny on Wednesday (17th October) and in a Prime Time debate on Tuesday (23rd October) of next week.

Traditional content analysis can often take days to complete.  SentiWords Tweets analyses sentiment on Twitter traffic related to the election, delivering results instantly and continuously.  It offers the public, the media, the candidates and researchers a timely perspective on the dynamics of the electoral process and public opinion.   Further insights after the next debate!