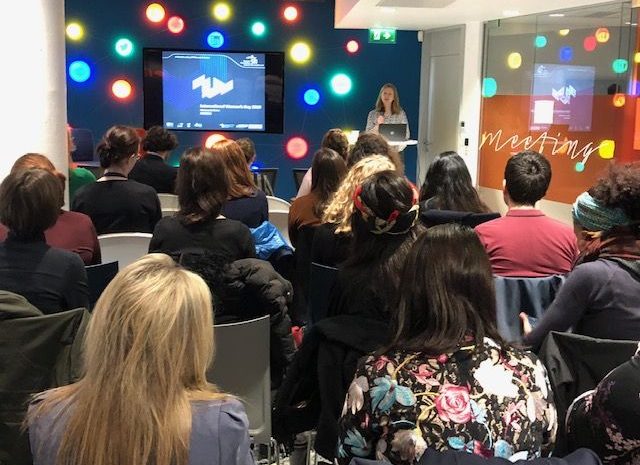 For International Women’s Day (IWD) on Friday, March 8th, 2019, the ADAPT Centre hosted an event to discuss the growing impact of gender equality on research. Topics discussed regarded the effects of gender on the development of technological innovation and how technology affects gender as well.

The event was held at the Bank of Ireland Workbench, where guest speakers Associate Professor Anne Holohan, PhD student Eva Vanmassenhove, and post-doc researcher Dimitar Shterionov spoke about their research on gender in association with technology. This year’s campaign for IWD was #balanceforbetter, which was reflected in each speaker’s research for methods towards a more gender-balanced society.

Professor Anne Holohan, Department of Sociology, Trinity College Dublin, introduced GAP — a video game created to educate those in peacekeeping missions (such as militaries or police forces) about diversity in gender and cultural groups. The game allows the user to take over two roles — a Finnish female military personnel and a Portuguese male police officer.

The game’s storylines, which are based off of real people, are aimed at providing empathy and awareness of other roles (male and female) through experiential, hands-on learning. Upon completing the game, an assessment is given to ensure that users have been trained on the significance of gender and cultural awareness.

Eva Vanmassenhove, a PhD student at ADAPT Centre researching Statistical Machine Translation and Neural Machine Translation, discussed the difficulties that come with grammatical gender in languages. Languages such as French are naturally more inclined to have a masculine dominance in communication, which is reflected when put into datasets.

One of Vanmassenhove’s datasets showed that with equal male and female subjects in different age groups, the sentences that the computer transcribed were increasingly more masculine the older the group of subjects became. She uses BLEU, an algorithm used to rank the quality of a translation from one language to another, to assess the difference her Neural Machine Translation (NMT) makes in a general testset versus a masculine vs feminine testset. When given the masculine/feminine test, the NMT was more accurate 100% of the time.

Dimitar Shterionov, a post-doc researcher at ADAPT Centre, discussed cross-gender predictions based off of user information from the 1.8 billion websites in existence. Based off one’s choice of words online, systems can predict whether the user is male or female. Shterionov stated this is because females tend to use more adverbs and adjectives than males, and the choice of topics one is writing about can greatly determine their gender.

Shterionov calls their methods of prediction an “armada of models” which was tested across different social media platforms and the news to determine which users were male and which were female. The armada proved to be above 50% accurate on every platform, for both cross-genre and in-domain tests. This meant that generally, as Shterionov describes, the differences in male and female writing styles are identifiable.

Following the three speakers, a Q&A and networking hour was held so that discussions about gender differences in technology could continue. The event celebrated both men and women in the field and the efforts towards more balanced technology in achieving #balanceforbetter.