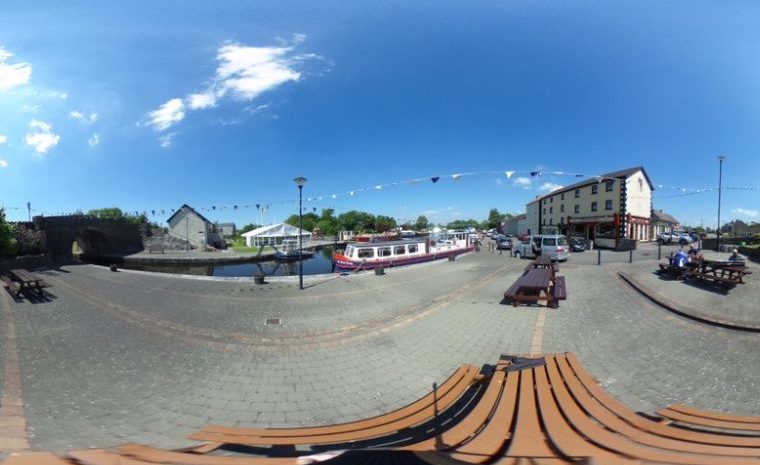 Running from 27th of May through 1st of June, The National Famine Walk, Dublin, sees an international group following in the footsteps of the 1,490 tenants of Strokestown forced to emigrate to Canada during the summer of 1847. Using digital technology from the Science Foundation Ireland funded ADAPT Centre for Digital Content Technology, members of the public can experience the walk remotely.

The interactive website includes a live tracker to follow the progress of the Famine walkers in real time. ADAPT’s digital media experts will capture and publish interviews and footage of the walk from Strokestown to Dublin on a daily basis using state-of-the-art 3D video technology.

Owen Conlon, Prof of Computing with ADAPT at Trinity College Dublin, explains the background to the event: “The National Famine Way and Walk showcases a three-year research relationship between the ADAPT Centre and the Irish National Famine Museum and Archive at Strokestown, Co. Roscommon. The centre has developed a crowd-sourced transcription site to support the digitisation of archival content. Knowledge extraction techniques, developed in ADAPT, such as entity uplift have been applied to these documents to identify people, places, dates, and events in order to construct a web of relationships that were hitherto hidden. These relationships are helping researchers and members of the public to piece together the stories of the ‘Missing 1490’ whose journey we are commemorating.”

Declan McKibben, Head of Design and Innovation at ADAPT, explains how the technology will work on the days of the event: “The website we are using is a wordpress, content management system (CMS) and template website. Researchers will be active on Twitter while two ADAPT Centre researchers will walk with participants and generate content for engagement. A 360° video will be captured using Ricoh Theta S and a spatial audio capture device. This content will be published in video format via YouTube, to create a novel immersive experience for people to access the content. 360° photos will be captured using Ricoh Theta S technologies. We are using smart phones to capture video and images, interviewing participants, and publishing GPS coordinates to ensure an interactive walk map is up-to-date. We will also provide daily blog digests which include a summary of the walker content for the day together with guest blog posts.”

Strokestown Famine walkers will embark on the six-day trek, of 155km, along the Royal Canal between Strokestown and Dublin, 170 years after the emigrants’ original journey. President Michael D. Higgins will greet and send off the Famine walkers at a commemorative event on 27th May at Richmond Harbour, Clondra, Co Longford.

In offering some history behind the event: Events began in May 1847, also known as, ‘Black 47’, and became one of the worst years of suffering of the Great Irish Famine. The tenants of Strokestown were escorted by Bailiff Robinson to Dublin to ensure they boarded a ship and did not return home. Tenants were shipped off on open deck packet steamers to Liverpool and then crossed the Atlantic on some of the worst “coffin ships”:  Erin’s Queen, Naomi, The Virginius and The John Munn. Almost half of those who embarked died aboard ship or in the ‘fever sheds’ at Grosse Isle when they arrived in Quebec. Participants on the walk and those following the event remotely will learn all of this and more at the National Famine Walk, Dublin and at www.nationalfamineway.ie.